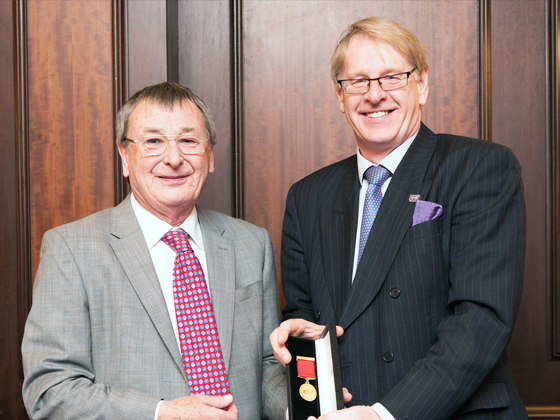 Past president of B&ES (HVCA), Peter Hoyle has become only the sixth person in the 109-year history of the Building & Engineering Services Association to be awarded its Distinguished Service Award. In making the presentation in Mr Hoyle’s native Yorkshire, B&ES chief executive Roderick Pettigrew explained that the Distinguished Service Award was conferred upon “those who have rendered extra-special service to the Association and its activities” – adding that the roll-call of previous recipients represented “a genuine B&ES hall of fame”.

Mr Hoyle was the only president (of what was then the HVCA) since the Second World War to have served two consecutive terms of office – “to say nothing of his subsequent prominence on the international stage, as president of GCI-UICP, the European umbrella body for our sector,” Mr Pettigrew added.

He went on to recall that Mr Hoyle had been a member of the Council of the Association for over 20 years, and had also served on the Membership, Operative, Finance and House Committees, as a director of B&ES subsidiary Piper Enterprises and as chairman of its training provider Building Engineering Services Training Ltd (BEST). “In his inaugural address back in the year 2000, Peter insisted that quality begins and ends with people – and that any organisation, business or industry sector can only be as good as the individuals who are involved in its operations.

Mr Pettigrew recalled. “Peter Hoyle can rest assured that – as far as this Association is concerned – he is one of the most significant contributors of all time.”

Andrew Iveson commented that, “As a long time friend, mentor and shareholder Peter has been an inspiration to me and the business. The award is well deserved”.